Electrical heating is an EOR process that works on the principle of transferring heat into the reservoir via electrical means. It involves injection of electrical energy to the reservoir, heating the area and causing an increase in oil temperature. Heating up the reservoir reduces the oil viscosity, thus, making it easier to flow. While electrical heating is a relatively new technique, advances in the past couple of years have allowed for testing by theoretical, laboratories, and field trial research in areas including, Russia, the United States of America, Canada and other countries.[1] Focus on electrical enhanced oil recovery (EEOR) processes is of great importance, because of the abundance of heavy oil, tar sand and bitumen reserves in Canada, Venezuela, countries of the former USSR, the United States of America and China. [2][3][4]

The EEOR technique works on the basis of using electrical means (e.g. radiofrequency (RF) waves, inductive heating and DC heating). The primary function of this process is to increase the mobility of oil for it to flow easily towards the production well. The electrical energy that is supplied either raises the temperature of the reservoir or creates vibrations in the hydrocarbon molecules. [5]

Heating the reservoir is either done by a steam chamber or direct heating into the near wellbore. The amount of power required for each well and formation is dictated by the production rate and operational requirements. The frequency of the electric current determines the mode of electrical heating. The alternating electric field causes polar molecules to align and relax. The molecular movement generates heat. Electrical heating design's key goal is to reduce electrical losses while localizing heating.

The four critical components of electric heating applications are:

Electric heating can be divided into three categories depending on the frequency of the electrical current being used. These include: 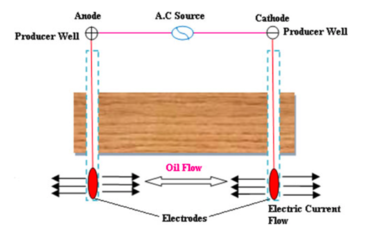 Low-frequency electric heating is often referred to as Ohmic/Joule heating. Electric current is passed through the formation and due to power dissipation [5] heat is produced resulting in an increased reservoir temperature. This method is employed by using two wells drilled into the formation. One well represents the anode and the other the cathode. The electrodes are cased and effectively insulated in the adjacent strata. A potential difference is provided between the two electrodes and a current is allowed to pass through the formation. The current frequency ranges from 0.1 to 60 cycles/sec. [6] The interstitial salty water present in the formation conducts electricity, ultimately increasing the local reservoir temperature. The heat produced near the electrodes can easily vaporize the salinated water, increasing the resistance of the conducting path and impeding heat transfer. Calculating an accurate yet optimal electrical conductivity for the formation is therefore vital in these operations.

The electrical conductivity in the formation can be calculated by the Archie and Humble's relation [5]:

where φ is the porosity of the reservoir, Sw is the water saturation and Rw is the resistivity of brine given in ohm-m. The term Rw illustrates the dependence of water resistivity on temperature and is defined as: 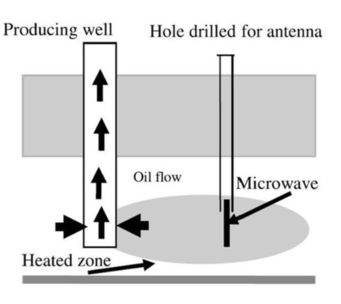 In microwave heating, microwaves interact with the water molecules present in the formation. These molecules are set into circulatory and oscillatory motion [8] generating frictional heat which then may be transferred to its neighbors (mainly the matrix and the oil) ultimately elevating the temperature of the reservoir. The extent of temperature elevation is determined by the amount of microwave energy absorbed by the fluids. [9] As shown in Fig.2., an oil reservoir is heated up under radiation of microwaves emitted from an antenna located in the wellbore and the oil is being produced to the surface through a production well.

Inductive heating and hydrocarbons have been known since at least 1929.[11] It was not until the early 1980's, that the Fisher brothers engineered a way to implement this process for in-situ recovery on a larger scale. [12]

The frequency for inductive heating ranges from low to medium (10 kHz or more). Inductive heating generates heat near the wellbore typically in vertical wells. A large diameter coil is intertwined among the well (either vertically or horizontally) and heats the oil sands. [10] The alternating electric and magnetic fields present around the coil cause eddy currents. These eddy currents flow through the metallic materials present in the formation producing heat and raising the temperature. [5]

The increase in temperature can be calculated as follows [5]:

represent the density, specific heat capacity and thermal conductivity of the medium, respectively.

are the density, specific heat capacity and superficial velocity of the fluid phase. The term P is the electromagnetic power that is dissipated per unit of volume and is a function of the electric field,

and the effective conductivity of the medium,

Other recently explored methods of electrical heating include:

Farouq Ali et al. (2018)[10] have gone into detail about the above-explored methods. While these methods have yielded viable experimental results, due to the cost and logistics they are not widely used in the industry. As an example, ultrasonic wave heating has increased the recovery rate in a Western Siberian field in Russia to 10.2tons/day, an increase of 91% in hydrocarbon production. [13]

A summary and description of the electrical heating methods can be found in Table 1. below. [9]

Each reservoir is unique, so understandably, different electrical techniques can be applied based on the characterization of the oil reservoir. Water saturation, salinity, mineralogy and frequency are all key factors in the successful implementation of electrical heating. [14]

Comparison between EEOR techniques and SAGD

All thermal recovery methods for heavy oil, tar sands and bitumen reservoirs work on the principle of thermal energy being transferred to the oil, reducing the viscosity and allowing for flow towards the production well. The most popular thermal recovery method is Steam Assisted Gravity Drainage (SAGD), followed by CSS and steam floods. While often used in unconventional reservoirs, these methods have not been yet investigated in thinner, less permeable, heterogeneous reservoirs, or containing bottom water zones. [9] For this reason, electrothermal methods have attracted more attention for the difficult reservoirs where conventional thermal methods are not expected to work. [15]

Li (2019) published a comparison between the EEOR and SAGD in part of his dissertation. Reservoirs with different petrophysical properties of the Athabasca McMurray oil sands in Alberta, Canada were modeled using the Computer Modeling Group (CMG) STARS on bitumen reservoirs.

An advantage that EEOR methods - specifically Microwave-Assisted Gravity Drainage (MWAGD) - have over SAGD is the speed at which heat transfer occurs. MWAGD is a rapid process and less time-consuming than conventional thermal methods. Additionally, MWAGD does not cause any consequential damage to the formation. [16] Moreover, reservoir heterogeneity does not significantly affect the overall energy efficiency in electrical heating processes. [17]

Despite the popular use of steam-based thermal recovery methods, unavoidable challenges arise. Injecting steam at temperature ranges of 200 to 250oC leads to overheating and heat loss. There are some instances where a top/bottom water or top/bottom gas cap is present in the reservoir. In these cases, steam injection processes are negatively affected since the steam chamber is in touch with these regions. [18] Fortunately, these challenges can be mitigated via EEOR methods.

Advantages and disadvantages of EEOR

Electrical heating has numerous advantages over conventional thermal methods. Electrical heating works on the basis of targeting part of the reservoir instead of heating the bulk reservoir. [1] The advantage to this is that the specific area can be heated up more effectively and with lower heat losses. Additionally, this proves that these techniques are more efficient and cost-effective when compared to the standard EOR methods. Another major advantage of EEOR methods is their applicability in heterogeneous reservoir environments. [19] Geology or characterization is not affected by employing electrical techniques allowing for EEOR to be suitably utilized in different reservoirs having different formation depths, formation porosity and permeability, temperature, pressure and thickness. [20]

One of the most common operation problems with EEOR is the possibility of high-water saturation zones in the wellbore. Most heating occurs in those zones. [10] EEOR additionally raises the temperature of rocks and other inorganic materials present in the reservoir. While this can be seen as advantageous when looking at the Athabasca oil sands in Alberta, Canada, it is disadvantageous when one considers shales. [10] It has also been reported that extensive use in crude oil reservoirs has resulted in formation damages due to the deposition of paraffin near the wellbore [22], reducing the formation permeability and ultimately decreasing oil production.

Due to the favorable results of electric heating, technologies for electrical heating have grown quickly. Countries like Russia USA, Canada and China have begun utilizing these methods for oil production in their unconventional reservoirs, since the mid - 1960's. Electrical field trials continue to be underway in these areas as technologies continue to advance and improve.

In 1981, Bridges et al. [32] conducted field tests on tar sands in Asphalt Ridge, Utah, USA. Even though this was a pilot test, the results from electrical heating were favorable in the tar sands field. Temperatures exceeded 473K and 30-35% recovery was achieved in just 20 days.[32] These results were encouraging and exceeded the expectations of researchers; continuation of heating would result in a greater continuation of hydrocarbon production. Also noted, the power loss was minimal in all of the experiments, which proved the efficiency of the heating. [32]

Two pilot tests were conducted in 1988-1989 in the Lloydminster Heavy Oil Area, Saskatchewan, Canada. While long-term heating could not be achieved (due to equipment failure and unique reservoir conditions), the technical results looked promising. Water cut in the field decreased by 5%, while production rate doubled. [34] This is directly related to the electric heating effects and improvement of oil mobility.