Unconventional resources of oil and gas from a geologic perspective

The unconventional resources are classified into: shale gas, shale oil, tight gas, tight oil, coal seam gas/coal-bed methane and hydrates. Most of them will be covered in this article from a geologic perspective.

Distribution of the main unconventional resources

Formation of coal process Coal was formed from the remains of vegetation that grew about 400 million years ago. Therefore, it’s called fossil fuel. Formation of peat Peat is a soggy, dense material which is formed by accumulation of layers of sediments over the remains of dead plants and trees that sank to the bottom of the swampy areas, over long periods of time. The changes in the earth's surface caused deposits of sands, clay and other minerals to accumulate and bury the peat underneath. Then, sandstone and other sedimentary rocks were formed, and the pressure caused by their weight squeezed water out from the peat. This depth associated with heat, gradually changed the material into coal. Scientists claim that 3 to 7 feet of compacted plant matter is required to form 1 foot of bituminous coal. This process is indicated in the following Figure. 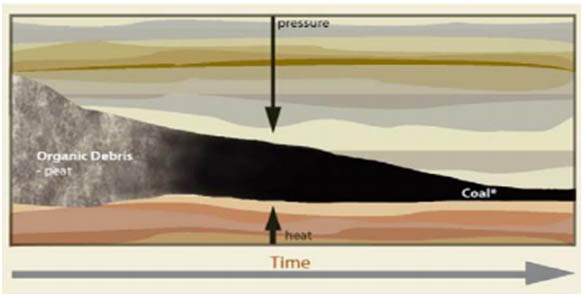 Formation of coal bed methane Biogenic methane is produced by anaerobic bacteria in the early stages of coalification.Thermogenic methane is mainly produced during coalification at temperatures ranging from 120 – 150 °C. However, some contrasting features exist between CBM reservoirs and conventional gas reservoirs.[2] These features include: Gas CompositionGas produced from coal beds may be initially higher in methane content than the gas produced from conventional reservoirs. Methane is less adsorbed than ethane and other heavier saturated hydrocarbons. Consequently, they may not be as readily adsorbed at the onset of production.

The mechanism by which hydrocarbon gases are stored in the coal reservoir contrasts the mechanism of gas storage in conventional reservoirs. However, methane is held to the solid surface of coal by adsorption forces instead of occupying void spaces -as in the case of free gas- between sand grains (only 1-2%).

If we study the coal microspores we will see a clear illustration of an enormous surface area that the coal of one lb of has a surface area of 55 football fields, or 1 billion sq ft per ton of coal water production The water from coal's natural fractures must be removed first before methane can be desorbed. These 2 figures indicate that the large volume of water in the first 2 years of production decreases relatively rapid to small volumes for the remaining life of the well.

Here we have an additional feature for coal; which is the mechanism of gas diffusion through the microspores of the coal matrix, we find here that the mass transportation depends on the methane concentration gradient across coal's microspores as a driving mechanism, which is indicated in the following figure.

Distribution of coal bed methane is illustrated by the following table 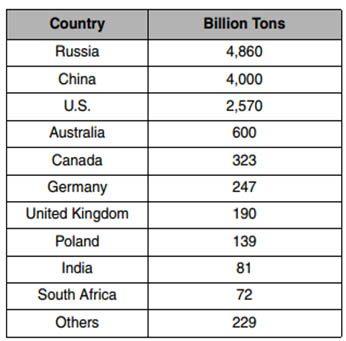 In the 1970s, the U.S. government decided that the definition of a tight gas reservoir is “the one in which the expected value of permeability to gas flow would be less than 0.1 md.” However, that definition had some political aspects which were related to the recovery produced form tight reservoirs. But if you use our main aspect which is the scientific one, a better definition could be revealed which states that a tight gas reservoir is “A reservoir that cannot be produced at economic flow rates nor recoverable economic volumes of natural gas unless the well is stimulated by a large hydraulic fracture treatment or produced by use of a horizontal wellbore or multilateral wellbores.”If we study consider that definition a rule, based on it we could say that there are no “typical” tight gas reservoirs, a tight gas reservoir could have various characteristics through depth, pressure, temperature, number of layers or even homogeneity.[1]

What makes a tight reservoir?

There are a number of reasons that can make a reservoir tight.

In addition to the factors related to the fluid nature, the rock parameters are equally important; yet those are controlled by depositional and post depositional environments the reservoir is subjected to.

Natural gas is not different from what you currently use to heat your home, cook with, or use to generate electricity, which is naturally trapped in its original source rock; the organic-rich shale that formed from the sedimentary deposition of mud, silt, clay, and organic matter on the floors of shallow seas..[1] 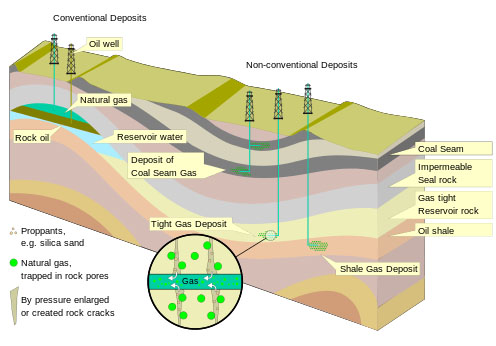 Thermal Maturity is an indicator of how much pressure and temperature the rock has been subjected to.

The shale is usually more mature, has higher gas ratio and matured in the thermogenic gas window, where high heat and pressure have converted petroleum to natural gas.

The pore spaces here not the main core characteristics but the effective permeability in shale gas which ismuch less than 0.1 (md).[3]

Here is a map of major shale gas basis all over the world from the EIA report World Shale Gas Resources: An Initial Assessment of 14 Regions Outside the United States.

Why is it hard to be studied?

Subsurface deposits have pressure and temperature specific conditions which is suitable for "methane hydrate".

So removing it from these conditions makes it unstable; as they are brought to the surface, the pressure is reduced and the temperature rises. This causes the ice to melt and the methane to escape so they can’t be drilled or cored for any studying matter

It is conservatively estimated to be 4,000 times the amount of natural gas consumed in the United States in 2010.

This article illustrates the concept of unconventional resources and the different between them and the conventional ones, it briefly summarizes definitions, characteristics and distribution of main unconventional types, it also answers ;some interesting questions relating to some of that types.