Sour gas is natural gas or any other gas containing significant amounts of hydrogen sulfide H2S).Sour gas reserves are historically left undeveloped because of the technical challenges and costs involved in their extraction and processing.[1]

Natural gas that contains more than 4 ppmv of hydrogen sulphide (H2S) is commonly referred to as "sour". This is because the odour of hydrogen sulphide gas in air at very low concentrations is similar to that of rotten eggs. Significant quantities of natural gas resources around the world are known to contain H2S. These have been difficult to produce in the past because of the tendency for sour gas to cause corrosion and sulphide stress corrosion cracking, particularly in pipelines. With the advent of corrosion resistant materials and advanced manufacturing techniques for steel pipelines the production of these sour gas reserves is now becoming possible. Downstream refineries have been handling sour gas as a by-product from the processing of sour crude oil for many decades .....

The removal of H2S from sour gas is called “sweetening". 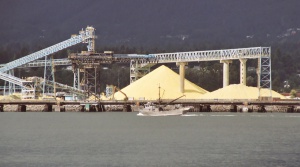 Alberta Sulfur at Vancouver BC

TDA Research developed the Direct Oxidation to Sulfur process, which is licensed to GTC Technology. The process converts H2S catalytically directly into sulfur, from lean (low concentration) H2S streams (0.2% to 40% H2S). The sulfur conversion efficiency is around 90% in a single pass.[2], and can attain 95 - 98% overall conversion efficiency. Although the GT-DOS process can directly treat gas, it is most commonly considered for sulfur recovery from an acid gas stream from an Acid Gas Removal unit. In that configuration, the H2S in the acid gas is partially oxidized directly to Sulfur (without producing SO2 first, as in the Claus process). Unlike the Claus process, there is no burner and reaction furnace, which means the GT-DOS process can directly handle lean acid gas streams. The operating cost is in the $200 - 1,000 per ton of Sulfur removed.

This is a liquid-redox process. The Stretford process was developed during the late 1940s to remove hydrogen sulfide H2S from town gas. It was the first liquid phase, oxidation process for converting H2S into sulfur to gain widespread commercial acceptance. Developed by Tom Nicklin of the North Western Gas Board (NWGB) and the Clayton Aniline Company, in Manchester, England, the name of the process was derived from the location of the NWGB's laboratories, in Stretford. 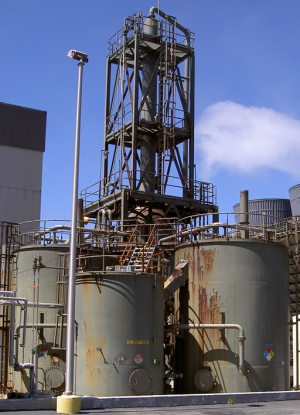 This is a liquid-redox process. The LO-CAT® process is a patented, wet scrubbing, liquid redox system that uses a chelated iron solution to convert H2S to innocuous, elemental sulfur. It does not use any toxic chemicals and does not produce any hazardous waste byproducts.[3]. In general, the LO-CAT process can directly treat a gas stream, or treat the H2S containing stream from an Acid Gas Removal unit, although the direct treat capability is limited to low pressure streams. The operating cost is in the $1,000 - 2,000 per ton of Sulfur removed.

SulFerox is a Shell proprietary Iron Redox process, whereby a sour gas stream, containing hydrogen sulphide, is contacted with a liquid, containing soluble ferric (Fe3+) ions. In the process the H2S is oxidized to elemental sulphur and the Fe3+ is reduced to ferrous (Fe2+) ions. The system is regenerable, Fe2+ is subsequently reconverted to Fe3+ by oxidation with air. Sulphur is recovered from the aqueous solution as a moist cake.[4]

Typical Sulferox[5] process equipment is illustrated in Fig. 4. In this process, the sour gas is contacted in a small contactor in cocurrent flow with a water solution containing about 4% ferric iron ions, held in solution by proprietary chelate ligand. The H2S ionizes in the solution, and the ferric iron ions exchange electrons with the sulfur ions to form ferrous iron ions and elemental sulfur. The gas and the solution leave the contactor and are flowed into a separator. The gas out of the separator is sweet and requires further treating for dewpoint control. The solution is flowed into additional vessels for separating the elemental sulfur and for restoring the ferrous iron ions back to the active ferric iron state by contacting the solution with air. The chemistry is illustrated next.

In general, the Sulferox process can directly treat a gas stream, or treat the H2S containing stream from an Acid Gas Removal unit, although the direct treat capability is limited to low pressure streams. The operating cost is in the $1,000 - 2,000 per ton of Sulfur removed.

The THIOPAQ O&G process integrates gas purification with sulfur recovery in a single unit. The sour feed gas first comes into contact with the lean solution in the absorber. This solution absorbs the H2S to form sodium sulfides, and sweet gas exits the absorber, ready for use or further processing.[6] The process uses naturally occurring bacteria (Thiobacillus) to oxidize the H2S to elemental sulfur.

This process was developed in the 1990s by the Gas Research Institute for the H2S removal from high-pressure gas. The technology is currently licensed through URS/AECOM. CrystaSulf uses a nonaqueous solution with a high solubility for elemental sulfur. Because the elemental sulfur stays dissolved in the solution, there are no solids in the liquid circulated to the absorber. By design, CrystaSulf avoids the problems that make the aqueous sulfur recovery systems unsuitable for direct treatment of high-pressure sour gas.[7]