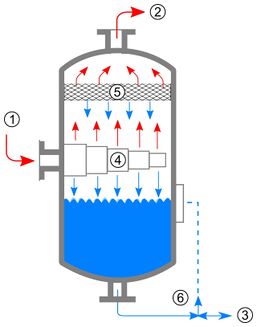 A separator is a pressure vessel used to separate well fluids produced from oil and gas wells into gaseous and liquid components in the oilfield. Hydrocarbon streams are made up of a mixture of gas, liquid hydrocarbons, and free water at the wellhead. In most cases, it's best to divide these phases as soon as possible so that the two or three phases can be handled separately. The liquids are separated from the gas phase by passing the good stream through an oil-gas water separator.

Figure 1 illustrates how a typical separator works. The gas/liquid stream passes through the feed inlet [1] and strikes the inlet diverter [4], which rapidly changes the direction of the flow of the entering stream, causing the initial gross separation. As a result of density difference, the liquid falls into the gravity settling section (the blue region) by gravity, while the gas rises and passes through a mist extractor [5]. The mist extractor acts as the final separating medium as it collects small liquid droplets and solid particles from the gas stream before it leaves the separator. The final gas product is expelled through the gas outlet [2], while the liquid is discharged through the liquid outlet [3].

While separators come in a variety of shapes and sizes, their primary purpose is the same. They are used to separate the elements that flow into them. Separators can be classified based on fluid flow or layout.

Types based on layout[1]

When well streams have a low to moderate gas-to-oil ratio and significant slugs of liquid are predicted, a vertical separator is commonly used. It can handle larger slugs of liquid without leaking into the gas outlet, and the liquid level control's action is not as crucial. There is less tendency for the liquid to re-vaporize into the gas phase due to the higher vertical distance between the liquid level and the gas outlet. A vertical separator takes up less floor area, which is crucial when space is limited, such as on an offshore platform.

The horizontal separator has a substantially larger gas-liquid interface area, consisting of a large, long, baffled gas-separation section that permits much higher gas velocities. The large liquid surface area allows gas to be removed from the liquid efficiently. When gas capacity is a design criterion, this type of vessel provides a large interface area between the liquid and gas phases, which allows for extra separation capability. Due to the greater wall thickness required with large diameters, the horizontal vessel is more cost-effective in high-pressure separators.

Spherical separators are a type of vertical separator. It is affordable and has a compact vessel arrangement. These types of separators have relatively little surge room and a liquid settling section. They are ineffective when a well stream contains excessive mud or sand or is subjected to surging foamy components. Controlling the liquid level is crucial. Because of their limitations, these separators are no longer widely used.

Types based on arrangement[3]

In the two-phase units, gas is separated from the liquid with the gas and liquid being discharged separately. A horizontal, vertical, or spherical separator can be used. A level-control or dump valve allows the liquid (oil, emulsion) to exit the vessel at the bottom. At the top of the vessel, the gas passes through a mist extractor, which removes any minute liquid droplets in the gas.

They are usually designed to separate related gas and oily water from crude oil, after which the oil can be transferred for further treatment. A horizontal, vertical, or spherical separator can be used. The major purpose of this type of separator, also known as a free-water knockout (FWKO), is to eliminate any free water that can create issues like corrosion and the production of hydrates or difficult-to-break tight emulsions. They are made on the basis of each phase having a varied density. The gas escapes from the top of the vessel, the crude oil remains in the middle, and the water, along with any entrained solids, sinks to the bottom (such as slugs, sand or debris). To create two independent layers, the two liquid phases require a particular retention time.

Other types of separators [4]

Centrifugal force is used to operate cyclone separators. These designs are best suited for gas streams that are relatively pure. By centrifugal force, the whirling action of the gas stream as it enters the scrubber separates the droplets and dust from the gas stream. Although such designs can result in much smaller sizes, they are not typically utilized in production operations because their design is sensitive to flow rate and they require more pressure drop than the standard configurations discussed above.

As the gas flows through the filter tubes in the initial separation step, any liquid mist coalesces into bigger droplets. These aggregated droplets are removed by a secondary section of vanes or other mist extractor devices. This vessel can remove all particles larger than 2 microns and 99% of particles less than 1/2 micron.

A scrubber is a two-phase separator used when the gas rate to liquid rate ratio is really high to collect liquids that have spilled over from production separators' gas outputs or to catch liquids that have condensed due to cooling or pressure drops.

Some schematics of typical two- and three-phase separators are shown in horizontal and vertical orientations below.

Figs. 1 and 2 illustrate two types of horizontal separators, as can be seen, a weir plate is installed to prevent the gas phase being carry-under to the liquid outlet, and well positioned liquid level to prevent the liquid carry-over from the gas outlet.

Figure 3 illustrates a horizontal double barrel two-phase separator, which is used for low liquid rates. A better quality of liquid stream can normally be expected, except for more difficulty and higher cost to build the vessel than the conventional vessel.

Figs. 4 through 6 illustrate different configurations of horizontal three-phase separators. Compared to the two-phase separator above, additional weir is introduced to control the oil/water interface

Fig. 7 shows a vertical two-phase separator with inlet diverter and demister. The inlet stream gets into the vessel from inlet device. After separation, the liquid phase drops down to the vessel bottom while gas phase floats up to the vessel top

Fig. 8 illustrates a vertical three-phase separator configured with inlet diverter and demister. After the inlet deverter, the separated gas flows up to the gas outlet, while the liquid phase (oil/water mixture) get into the liquid space through a down comer, where the oil/water are further separated and collected at the each outlet.

Fig. 9a is a schematic of a central inlet and dual outlet separator. This design is equivelent to combine two identical separators in parallel. Its main feature is to double the overall throughput at a reduced cost in manufacture, installation, and operation of the vessel.

Fig. 10a shows a two-stage, vertical scrubber with inlet diverter, mesh coalescer, and cyclone demisters. This unit has a high turndown capacity (that is, the ability to operate effectively at much less than the design capacity) and a small droplet capture range. The inlet diverter removes bulk liquids. At low rates, the mesh pad acts as a separator and removes the mist. At higher gas rates, the mesh acts as an agglomerator, coalescing small drops into larger ones. The larger drops are re-entrained but caught by the cyclone demisters. Typical turndown is ~8 to 10.

Fig. 10b is a single-stage cyclone scrubber for low liquid loading. The gas/liquid flows directly at the cyclones. This type of a scrubber is a compact unit with a three to five reduction in size and weight from a standard scrubber. Fig. 11 shows a schematic of a Gasunie cyclone separator. The separator is a stand-alone inlet cyclone in which the vessel shell itself is the outer wall of the cyclone. This separator is mainly used as a scrubber but can be applied for higher liquid loadings on the order of 10%v.

A gas/liquid cylindrical cyclone (GLCC) is a very simple and inexpensive centrifugal separation device. (See Fig. 12) Rough separation is achieved under low- g conditions, the swirl being generated by the sloped tangential inlet. The slope helps keep the level down during small slug occurrence. It is often used for bulk separation in conjunction with well testing as shown. The streams are temporarily separated, measured and analyzed, then recombined. With this arrangement, no level control is necessary because the levels are maintained by hydraulic balance.

A multitube cyclone inline separator, shown in Fig. 13, causes a wet gas flowstream to be divided between a number of cyclone tubes. As the gas stream enters a tube, it encounters a spin generator. The spin generator is a stationary device consisting of a hollow core and a radial arrangement of curved blades that divert the gas stream into a rotating flow pattern. In the tube downstream of the spin generator, liquid is separated from the gas by being slung out against the tube wall by centrifugal force. Near the end of each tube, the liquid film encounters a peripheral gap in the tube wall. This gap allows the liquid to be pulled out of the tube into the annular space around the tubes, where it falls to the bottom and is discharged under level control. The demisted gas stream continues through the tube, then recombines with that of the other tubes.