According to the World Bank, over 7,500,000 kt of methane were released into the atmosphere worldwide as a result of agriculture and industry. The United States government is developing regulations to reduce methane emissions from the oil industry by more than 40% over the next decade. Methane emissions are second only to carbon dioxide as contributors to the greenhouse effect. At the same time, the government is investing money in research to seek reliable ways to measure the level of methane emissions in the atmosphere that have come directly from natural gas production.

Natural gas makes up about a quarter of the energy used in the United States.[1] New production methods, including those related to hydraulic fracturing, are expanding access to natural gas and have increased natural gas based power, which is credited with decreasing greenhouse gas emissions in the country. Recent estimates for methane emissions from natural gas industries in the United States have been widely divergent. Some discrepancies noted by industry surveys have led to a thorough review of newly available information and are leading to the improvement of estimation methods and emission factors associated with activities that comprise natural-gas systems. This has manifested itself in the engineering estimations that are used for compiling the national GHG Emissions Inventory and in the methods used by companies for reporting under the mandatory national GHG Reporting Program. Both the inventory and the reporting program are programs of the US Environmental Protection Agency (EPA).

EPA reports show that nearly 29% of all methane emissions in 2012 came from E&P activity.[2] Natural gas is the largest methane source, followed by enteric fermentation--the digestive process of grazing animals that produces methane as a gassy byproduct--at 25%. Grazing animals also produce manure, which is responsible for an added 9% of methane emitted.

With direct measurements of emissions from devices on 377 wells operated by 10 companies cooperating on the survey, Allen gathered data that changed the EPA’s pie chart of E&P emissions of methane. Allen concluded that emissions during flowback have sharply dropped from 26% to 1% in the EPA’s Greenhouse Gas Inventory. The decline, in addition larger-than-expected emissions by gas-powered pneumatic control devices, pushed its share of natural gas emissions from the EPA estimate of 26% to a steep 42%, making it the largest single category. 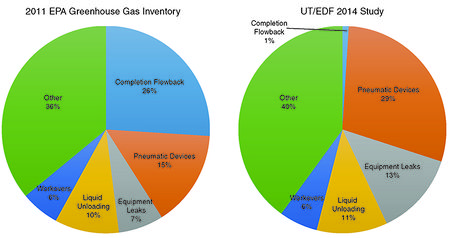 Two 2015 studies of wellsite emissions showed a rapid drop in methane emissions from water flowing back after fracturing, increasing the relative importance of emissions by well equipment.

The EPA estimates that the industry’s natural gas emissions have fallen 16% in the past 25 years. The biggest gains over that period were from reduced emissions from control devices and installation of plunger lift systems. More recently, some of the biggest gains have come from green well-completion methods that capture gas that once escaped from fluids flowing back after fracturing. The fluid is either flared or captured then processed and sold to pipelines.

EPA predictions say that without further action by the industry and regulators, natural gas emissions will rise by 25% in the next decade as gas production rises. While the US government considers further action, some states have already made moves. Colorado is a testing ground for methane emission reduction methods and research seeking better emission measurements.

Building an emissions tracking system that accurately accounts for all major contributors to methane emissions is a huge challenge on many fronts, from the high-cost logistics associated with gathering big data in the air and on the ground to analyzing it using advanced methods needed to simulate the atmospheric movement of emissions.

EDF commissioned a study, conducted by the consulting firm ICF International, concluding that the added cost of a 40% reduction in emissions from natural gas production, processing, and delivery would be about a penny per Mcf and could largely be done with available technology.