Density is defined as the mass per volume of a substance.

typically with units of g/cm3 or kg/m3. Other units that might be encountered are lbm/gallon or lbm/ft3 (see Table 1).

For simple, completely homogeneous (single-phase) material, this definition of density is straightforward. However, earth materials involved in petroleum engineering are mixtures of several phases, both solids (minerals) and fluids. Rocks, in particular, are porous, and porosity is intimately related to density.

Porosity (Φ) is defined as the nonsolid or pore-volume fraction.

Porosity is a volume ratio and thus dimensionless, and is usually reported as a fraction or percent. To avoid confusion, particularly when variable or changing porosities are involved, it is often reported in porosity units (1 PU = 1%).

From these we can define the various kinds of porosity encountered:

Relationship of density and porosity

Fig. 1 shows the appearance of these types of porosity in a sandstone.

Similarly, the definitions of the standard densities associated with rocks then follows: 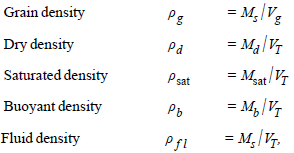 where Ms, Md, Msat, Mb, and Mfl are the mass of the solid, dry rock, saturated rock, buoyant rock, and fluid, respectively.

The density of a composite such as rocks (or drilling muds) can be calculated from the densities and volume fraction of each component. For a two-component system,

Expanding this into a general system with n components,

Eq. 8 is a fundamental relation used throughout the earth sciences to calculate rock density. Given a porosity and specific fluid, density can be easily calculated if the mineral or grain density is known. Grain densities for common rock-forming minerals are shown in Table 2. The result of applying Eq. 9 is shown in Fig. 1.

Note in Table 2 that there are several densities reported for the same mineral group, such as feldspar or clay. The density will change systematically as composition varies. For example, in the plagioclase series, the density increases as sodium (albite, ρ = 2.61 g/cm3) is replaced by calcium (anorthite, ρ = 2.75 g/cm3). The most problematic minerals are clays, particularly expanding clays (montmorillonite or smectite) capable of containing large and variable amounts of water. In this case, densities can vary 40% or more. This is a particular problem, because clays are among the most common minerals in sedimentary rocks.

Reservoir rocks often contain significant amounts of semisolid organic material such as bitumen. These will typically have light densities similar in magnitude to those of coals.

In general, density increases and porosity decreases monotonically with depth. This is expected, because differential pressures usually increase with depth. As pressure increases, grains will shift and rotate to reach a more dense packing. More force will be imposed on the grain contacts. Crushing and fracturing is a common result. In addition, diagenetic processes such as cementation work to fill the pore space. Material may be dissolved at point contacts or along styolites and then transported to fill pores. Some of the textures resulting from these processes were seen in the photomicrographs of Rock types. In Fig. 2[1][2][3][4][5][6][7][8], generalized densities as a function of depth for shales are plotted. The shapes and overall behaviors for these curves are similar, even though they come from a wide variety of locations with different geologic histories. These kinds of curves are often fit with exponential functions in depth to define the local compaction trend.

Differential or effective pressures do not always increase with increasing depth. Abnormally high pore fluid pressures ("overpressure") can occur because of:

The high pore pressure results in an abnormally low differential of effective pressure. This can retard or even reverse the normal compaction trends. Such a situation is seen in Fig. 3[9]. Porosities for both shales and sands show the expected porosity loss with increasing depth in the shallow portions. However, at about 3500 m, pore pressure rises and porosity actually increases with depth. This demonstrates why local calibration is needed. It also indicates the pressure dependence of rock properties.

Numerous methods can be used in the laboratory to determine porosity and density. The most common are by saturation weight and Boyle’s law. For rocks without sensitive minerals such as smectites, the porosity and dry, grain, and saturated densities can be derived from the saturated mass, dry mass, and volume (or buoyant weight). These measurements allow calculation of saturated, dry, and grain density as well as porosity and mineral and pore volume by employing Eqs. 3 through 5.

The Boyle’s law technique measures the relative changes in gas pressures inside a chamber with and without a rock specimen. The internal (connected) pore volume is calculated from these variations in pressure, from which porosities and densities are extracted.

Several logging techniques are available to measure density or porosity.[10][11] These indirect techniques can have substantial errors depending on borehole conditions, but they do provide a measure of the in-situ properties. Gamma ray logs bombard the formation with radiation from an active source. Radiation is scattered back to the logging tool, depending on the electron density of the material. Formation density is extracted from the amplitude of these back-scattered gamma rays. The neutron log estimates porosity by particle interaction with hydrogen atoms. Neutrons lose energy when colliding with hydrogen atoms, thus giving a measure of the hydrogen content. Because most of the hydrogen in rocks resides in the pore space (water or oil), this is then related to the liquid-filled porosity. Note that the neutron log will include bound water within clays as porosity. In addition, when relatively hydrogen-poor gas is the pore fluid, the neutron log will underestimate porosity. In a similar fashion, the nuclear magnetic resonance (NMR) log will resolve the hydrogen content. This tool, however, has the ability to differentiate between free bulk water and bound water. Sonic logs are also used for porosity measurements, particularly when anomalous minerals (such as siderite) or borehole conditions render other tools less accurate. The technique involves inverting velocity to porosity using one of the relationships provided in Elastic wave velocities. Gravimetry has also been used downhole to measure variations in density. Although this tool is insensitive to fine-scale changes, it permits density measurement far out into the formation.

On a coarse scale, densities can sometimes be extracted from seismic data. This method requires separating the density component of impedance. This normally requires an analysis of the seismic data as a function of offset or reflection angle. This technique will probably see more use as seismic data improves and is further incorporated into reservoir description.