Water separated from oil and gas during production contains dissolved solids, including salts. Produced water with sufficient salt concentrations can damage plants and soils, if improperly handled. Remediation of salt-affected sites can be performed for a number of reasons. The driving forces behind the need to assess and restore a site affected by a saltwater release can include landowner claims, lease agreements, federal, state, and local regulations, reduction in long-term liabilities, company policies, and/or protection of useable land and water resources[1] 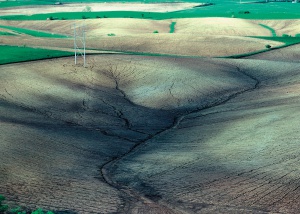 Severe sheet and rill erosion on highly erodible soils in northwest Iowa after heavy rains. The spring rains fell on soils that had no protection against soil erosion.(Photo: Lynn Betts 1999)

Consulting the landowner and lease requirements is crucial before any remediation process starts. Landowners will often have opinions on various remediation options. Cooperation with landowners should be a high priority due to the fact that a dissatisfied landowner may be in a position to complicate a resolution.

Federal, state, and local regulations may pertain to various aspects of remediation of produced water spills, including spill response, vegetation, vadose zone, groundwater or surface water impacts, and possibly air emissions. Regulations may influence the choice of remediation technology and the associated costs. A technology which may be suitable for certain conditions in one state may not be well received in an adjoining state.[1]

Corporate polices may include certain specific or general protocols and criteria for addressing a spill.[1]

The successful remediation of a saltwater spill on land depends on several environmental factors including the soil, climate, and water.

Remediation efforts require a basic knowledge of soil’s physical components, texture, layers, slope and erosion characteristics, drainage, and chemistry. Soil has four physical components: inorganic solids, organic matter, water, and air. The texture is the different characteristics of the particle size ranging from sand, silt, and clay. The layer is a typical vertical section of soil to about a 6-ft depth; these layers are called horizons. Soils have different vulnerabilities to erosion related to slope grade and length, plant cover, rainfall, and the texture with the combined stability of the soil. Soil drainage is very important, particularly with regard to salt remediation. Chemical reactivity in a soil can be usually linked with particle size. [1]

Generally climate determines the type of soil in a specific location. Climate dictates the frequency, duration, and quantity of precipitation and evaporation, as well as extremes and duration of temperature and wind. [1]

A basic understanding of water is an essential to understand how salts are transported within the soil. Understanding applied surface water, groundwater, and soil-pore water are the most important to successful salt mobility and remediation.

Even without a spill, some soils would have substantial land use limitations due to natural factors.

Capability class
The broadest category in the system. Class codes I to VIII indicate progressively greater limitations and narrower choices for agriculture. The numbers are used to represent both irrigated and nonirrigated land capability.[2]

The eight land use capability classifications are:

There are a variety of chemical amendments can be used to remobilize salts including:

Mechanical remediation involves mechanically moving the soil such as tilling or excavating. There are two basic types of mechanical treatment.

Dilution by land spreading effected soils into unaffected areas to reduce concentrations to an acceptable level or enhance other treatment options. Care must be taken so that land spreading does not create a larger area of contamination.

Disposal is usually the most expensive of treatments and is usually only considered as a last resort.

Total salt and total sodium concentration in a saltwater release can cause the soil to become saline and sodic. Produced water with high concentrations of total salts (salinity) and sodium (sodicity) can have a detrimental effect on terrestrial and freshwater environments. Excessive salts can create adverse chemical and physical conditions in soils and damage or kill vegetation.

Surface spills of produced water can occur as a result of: 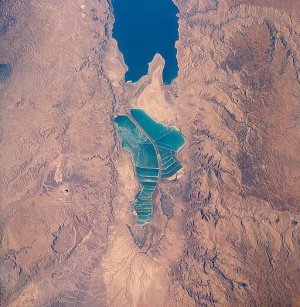 Disposal of most inland produced waters is by injection into enhanced oil recovery or produced water disposal wells. Some inland facilities may use evaporation pits to dispose of produced water.

An Injection well is a device that places fluid deep underground into porous rock formations, such as sandstone or limestone, or into or below the shallow soil layer. These fluids may be water, wastewater, brine (salt water), or water mixed with chemicals.[3]

The EPA breaks injection wells into six classes; Class II wells are associated with oil and natural gas production. Most of the injected fluid is salt water (brine), which is brought to the surface in the process of producing (extracting) oil and gas.[3]

There are several types of pits traditionally associated with oil and gas production. Following are three types of salt-related pits:

Completed remediation projects require an observation period of at least two years and in some case longer. In some instances follow-up tests and treatments are necessary if initial remediation is not returning expected results.

A guide for remediation of salt/hydrocarbon impacted soil.