The use of microorganisms for the extraction of oil from reservoirs was first suggested in1926[1][2][3]. This makes it one of the oldest enhanced recovery methods, however, it was neglected until the 1940s. This page aims to familiarise readers/researchers on the basics microbial enhanced oil recovery (MEOR), challenges faced, and trends followed over the years.

Oil is generally recovered in sequential stages, namely: primary, secondary, and tertiary. Primary recovery relies on natural pressure from the overlaying rock strata, and gas if present, to expel oil from the reservoir[2]. Primary ends when there is not enough pressure present or oil recovered at the production end, and so secondary recovery is employed. Secondary recovery involves injecting water or gas into the reservoir which in turn pushes oil to the production end[2].

For many reservoirs around 50% of total oil is recovered until the end of secondary stage, which leaves another half still trapped[3]. To recover the trapped portion, tertiary measures such as use of thermal (steam), chemical flooding (polymer, alkali, surfactants) and MEOR are employed.

Little to not enough research done during the early years of MEOR as it was regarded only as a biological curiosity. In fact, there was no proof of that hydrocarbons could be metabolized by microorganisms anaerobically, and there was hardly enough information on the microbiology of oil-bearing formations.

In the 1940s, ZoBell and a group of Russian researchers performed a series of investigations in a laboratory which marked the start of petroleum microbiology research[1][2][3]. By the late 1990’s there were works done on individual effects of MEOR such as bio-plugging, reduction of IFT and change in oil viscosity because of the gas generated by bacteria[1]. Some microbial by-products like bio-surfactants will alter the wetting phase of rock surfaces and increase water viscosity[2]. 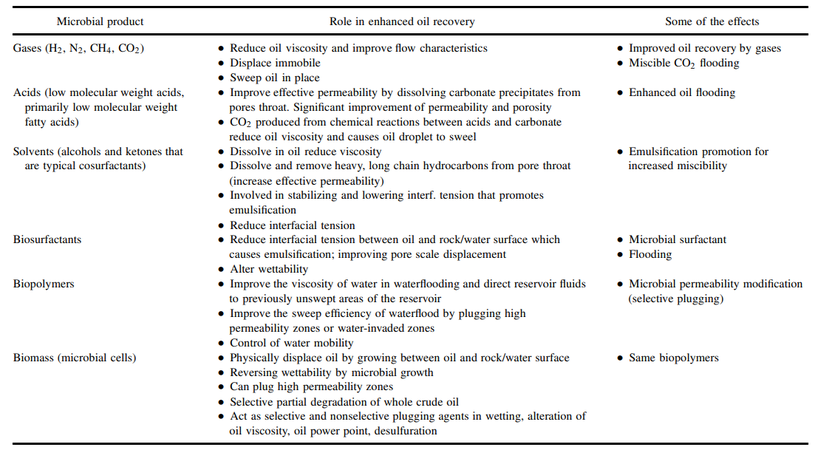 Research done in MEOR has been recognized, especially after the 1970s’ oil crisis, and the mechanism documented as significant in oil release from reservoir rocks. The two common practices of MEOR technology are in-situ and ex-situ[4].

In this system the oil wells are injected with potential microbes or selected nutrients (molasses, corn steep liquor, glucose, sucrose, nitrate salts) as slugs and shut-in for a period of 1-6 months, followed by waterflooding and analysis of the recovery[4]. The success of this process depends on the activity in the shut-in phase, where either the added or indigenous microorganisms grow while producing bioproducts. Generally, microbes that make bio-surfactant as products are preferred.

For this process the microbial products are made outside the well and later injected into well as slugs trailed by waterflooding or dissolved in injection water directly without any shut-in period[4].

Currently the MEOR technology has been applied in many oil fields in various countries like Australia, Canada, U.S., Germany, Russia, Romania, China and others[3]. China particularly has been involved in the MEOR research and use of biopolymers in their oil fields, hence, could be considered among the leaders in the field. In Canada field tests based on selective plugging were carried out using ultra micro bacteria. There is also a plugging method that uses the concept of biomineralization to form cement (calcite) that can consolidate sand and cause fracture in carbonate formations[3]. Similarly, Australia (Queensland) had generated ultra-micro bacteria, with surface active properties on the outer cell layers, from indigenous reservoir by manipulating the nutrients.