Petroleum is any hydrocarbon recovered from the subsurface of the earth after drilling such as oil and gas.Oil and gas provide about 60% of all the energy used by the society today. They provide fuel for means of transportation and they are a must for the daily life requirements including: heating, lighting and cooking. They are used in most of manufacturing processes around us such as: synthetic fabrics, plastics, fertilizers, detergent and many other purposes. Briefly, no one can imagine the world without oil and gas.

Most people know the source of petroleum is plants and animals that died millions of years ago. During this period, this high carbon content matter (plants and animals) was exposed to high pressure and temperature that caused them to become mature and generate petroleum. However, the processes that lead to the generation of petroleum are still not clear enough. Therefore, it is interesting to know these processes and how petroleum was generated and how did it move(migrates) in the subsurface untill it accumulated waiting for mankind to produce it and make use of it in all fields of life. The petroleum may be liquid or gas and our mission is to get it. Therefore, this article covers how it is generated, how it migrates and how it accumulates. 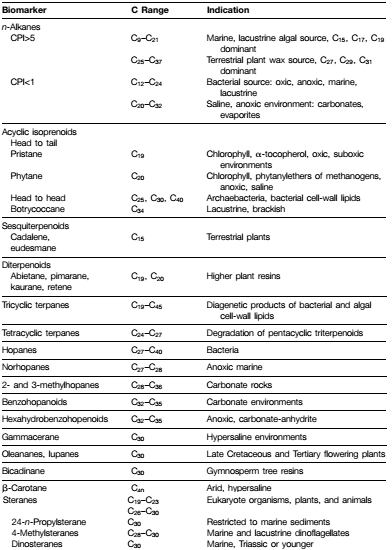 Maturation is the ability of the rock to generate hydrocarbons, and indicates its maturity. Therefore, the more the rock quality is, the more mature it is. Maturation occurs through millions of years in which diagenesis and catagenesis processes take place. About 10 to 20% of petroleum is formed during diagenesis. Most petroleum is formed during the catagenesis and metagenesis of the residual biogenic organic matter.Converting biomolecules into petroleum is called maturation. Figure 1[1] explains the maturation process

‘’Diagenesis is defined as the chemical reactions that occurred in the first few thousand years after burial at temperatures less than 50◦C.’’[2] During diagenesis: oxygen, nitrogen and sulfur are removed from the organic matter leading to an increase in hydrogen content of the sedimentary organic matter. In addition, presence of iron during diagenesis increases the probability of sulfur removal as the iron reacts with sulfur over long burial time and this increases petroleum economic value.

‘’The reactions that occur between 60 and 200◦C are considered to be catagenetic in nature.’’[2] During catagenesis, the organic compounds are exposed to diverse thermal degradation reactions that include double bonds reduction by adding sulfur or hydrogen atoms, cracking reactions and condensation reactions.

‘’Metagenesis takes place at temperatures over 200◦C and is considered to be a type of very low-grade metamorphism.’’[2] Figure 2 [3] explains the changes occur in organic matter during diagenesis, catagenesis and metamorphism 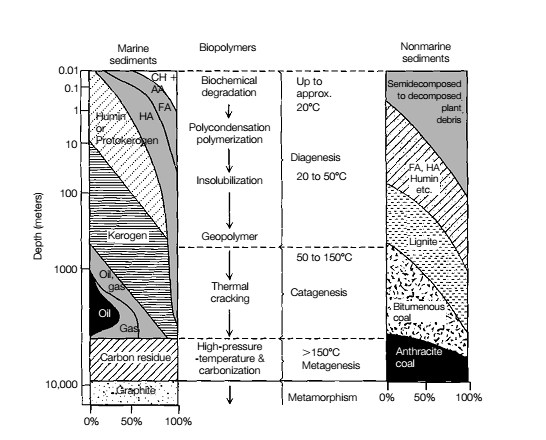 After petroleum generation it migrates until it is trapped. So, a brief overview about the migration process in indicated in the next section.

Primary migration takes place within the source rock after fracturing due to pressure increase that happens due to the generation of oil and gas. Since gases and liquids are less dense than solids, they take up more volume causing pressure increase. So, it is important for a productive source rock to be easily fractured to let the fluids move through it. During primary migration, gas and oil travel together as a single liquid phase due to the high pressures in the source rock as these pressures usually become higher than the bubble point pressure at which gases start to be liberated from liquid. Expulsion from the source rock may be occur in pulses due to the closure of pores and fractures after some time from the first expulsion. With time, petroleum creates enough pressure to reopen fractures and pores causing to a second expulsion, and the pulses continue to happen as long as the petroleum can rebuild enough pressure to reopen its path out of the source rock. After migration the pressure decreases and the fractures and pores close. Finally, petroleum migrates out of the source rock, pressures decline, especially if the petroleum migrates vertically.

Secondary migration is the movement of petroleum outside of the source rock and into a reservoir bed. During secondary migration, the gas and oil separate with the gas traveling ahead of oil. The largest petroleum deposits are the result of lateral migration because this provides a larger drainage volume of source rock than does vertical migration.In most cases, differences in permeability between adjacent stratigraphic layers inhibit migration.This causes petroleum to flow within geologic units. For petroleum to accumulate in a trap, it must encounter a cap rock or seal such as gas hydrates which make the best seals due to their low permeability. Evaporates are second best. They are found in deeply buried sediments as vertical pillars called diapirs. In the end, it is the essential to mention requirements for favorable petroleum accumulations as these accumulations will supply the world with its needs of petroleum.

Oil generation requires productive source beds of high organic carbon content. This source bed will be able to generate petroleum over a long period of time in which the beds are exposed to 3 stages of transformation: diagenesis, metagenesis, and catagenesis.

After these processes and generation of petroleum, petroleum migrates until it is trapped. However, the accumulation is not considered for production unless it is found in commercial amounts and satisfies the requirements for favorable petroleum prospects above-mentioned in this article.