There are two fundamental problems that make accurately estimating the productivity of a horizontal well more difficult than estimating the productivity of a vertical well. The theoretical models available have a number of simplifying assumptions and the data required for even these simplified models are not likely to be available. Still, we must make estimates and decisions based on those estimates. In this page, two productivity models that have proved useful in practice are discussed. The first, published by Babu and Odeh[1] in 1989, is limited to single-horizontal wells. The second, published by Economides, Brand, and Frick[2] in 1996, is more general and is useful for multilateral wells.

Babu and Odeh[1] obtained a rigorous solution to the diffusivity equation for a well in a box-shaped reservoir, subject to certain limiting assumptions. The assumptions include the following:

Fig. 1 introduces the nomenclature in the Babu and Odeh solution. The solution is quite complex but is approximated accurately with an equation written in the same form as the pseudosteady-state flow equation for a vertical oil well producing a single-phase, slightly incompressible liquid.

Table 1 gives equations to estimate CH and sp. Two examples adapted from Babu and Odeh[1] illustrate the application of these equations.

Economides et al.[3] presented a more general method to estimate productivity index for a horizontal well. The method has the advantage that it is applicable to multilateral wells in the same plane and is not limited to wells aligned with principal permeabilities. It includes solutions for wells with no pressure drop in the wellbore (infinite conductivity, as opposed to wells with uniform flux). It has the disadvantage that it requires interpolation in a table in which only certain drainage area shapes are given.

where Σs refers to damage skin, turbulence, and other pseudoskin factors. In Eq. 3,

and se, describing eccentricity effects in the vertical direction, is

se = 0 when a well is centered in the vertical plane. This convergence skin differs only slightly from that used by Babu and Odeh. The difference is 0.25 ln (kx / kz) + h / Lw[2dz / h - 1/2(2dz / h)2 - 2/3], which is usually small (< 0.5). Table 2 gives values of CH for several drainage areas and multilateral configurations. The equations as written are for isotropic reservoirs. Certain variable transformations are required before substituting into the working equation:

ϕ is the azimuth of the well trajectory (relative to the y-axis). Reservoir dimensions:

Solution. First transform the variables. From Eqs. 9 and 10,

Because the well is parallel to the x-axis, ϕ = 0, and 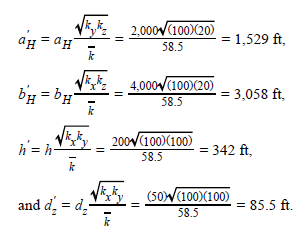 Thus, the equivalent system is a rectangular-shaped drainage area twice as long parallel to the wellbore (3,050 ft) as perpendicular, with L′/bH ′ = 765/3,058 = 0.25. In the original example, the well was off-center in the horizontal plane; here, assume that a centered well is an adequate approximation. From Table 2, CH = 3.19.

The result is slightly larger than the result using the Babu-Odeh method (J = 25.6 STB/D/psi). At least part of the reason for the difference is that, in this example, it was necessary to assume that the well was centered in its drainage volume, which was not true in the original example. The optimal location of a horizontal well to maximize productivity is to center it within its drainage volume.

Ozkan[4] compared "contemporary" (generally 1990s) and "conventional" horizontal well models in a paper published in 2001. He pointed out that the older models are used for both pressure-transient test analysis and for estimating well productivity. Ozkan stressed three limitations of the conventional models, which include the Babu-Odeh model and other pioneering work.

Ozkan pointed out that the damaged region around a horizontal well probably is nonuniform with distance (perhaps with the greatest damage near the heel of the well and the least near the toe, because filtrate invasion is of much longer duration near the heel). If there is variable permeability along the path of the well, the situation is even more complicated. Some contemporary models can take this variation into account; however, most conventional models cannot. Conventional models usually assume (implicitly) uniform skin effect along the wellbore. However, the contemporary models will not be helpful if the skin distribution along the length is unknown.

Ozkan notes that it is a common practice to complete horizontal wells selectively. Also, in other cases, some segment of the well may not be open to flow of reservoir fluids because of relatively low permeabilities or relatively large local skin effects. The absolute amount of the well that is open to flow and the location of the open intervals affect the pressure response in the well. Some contemporary well models can take these effects into account, but, again, the capabilities of the newer models may be limited if the location and length of the open intervals is unknown.

Many models assume negligible pressure drop in the wellbore (infinite conductivity). Others assume the same flow rate per unit length at all points along the well bore (uniform flux). In fact, there is likely to be finite pressure drop in the wellbore, resulting in neither uniform flow nor infinite conductivity. Contemporary models in which a reservoir model is coupled to a wellbore model can take these effects into account.

Unfortunately, contemporary horizontal well models have not led to simple, easily applied methods of well-test analysis or of predicting well productivity. Further, their full utility depends on availability of detailed well and reservoir description data. At present, the major use of such models may be to quantify the possible errors that arise from uncertainty and to be used to history-match observed information when sufficient data are available.