The Drake Well is a 69.5-foot-deep (21.2 m) oil well in Cherrytree Township, Venango County in the U.S. state of Pennsylvania, the success of which sparked the first oil boom in the United States. The well is the centerpiece of the Drake Well Museum located 3 miles (5 km) south of Titusville.[1] 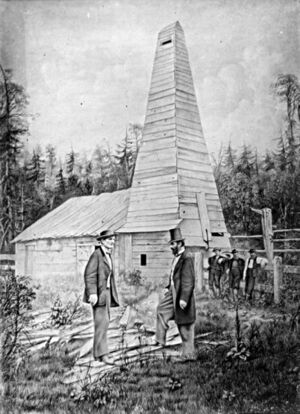 The Drake Well is located in Cherrytree Township, Venango County in northwestern Pennsylvania. situated on the flats 150 feet (46 m) from the east bank of Oil Creek. The site was originally on an artificial island formed by the creek and a mill race. On a floodplain, the well and the museum are protected by an earthen dike.

Most of the oil produced in northwestern Pennsylvania was formed in sandstone reservoir rocks at the boundary between the Mississippian and Devonian rock layers. Over time, the oil migrated toward the surface, became trapped beneath an impervious layer of caprock, and formed a reservoir. The presence of upwards-curving folds in the caprock called anticlines, or sometimes an inversion of an anticline called a syncline, greatly varied the depth of the reservoirs, from around 4,000 feet (1,200 m) to just beneath the surface.

Petroleum found along Oil Creek was known to Native Americans for hundreds of years through natural seeps. Europeans became aware of the existence of petroleum in the 1600s. At the time, this "mineral-oil" was used primarily for medicinal purposes and was reputed to cure many ailments, including rheumatism and arthritis. Around 1848, Samuel Kier realized the potential of the medicinal oil as an illuminant. Kier distilled the oil to make it more suitable in lamps by removing the odor and impurities that created soot when burned. A sample of oil was brought to Dartmouth College by Francis B. Brewer from the Watson, Brewer and Company Farm on Oil Creek around 1853. The sample was acquired by George Bissell who, along with Jonathan G. Eveleth purchased the farm for $5,000. Bissell and Eveleth took another sample of oil to Benjamin Silliman at Yale University in 1855 for further investigation. Silliman's report confirmed the quality of the petroleum and described the distillation processes needed to produce kerosene. The Pennsylvania Rock Oil Company was incorporated and the farm transferred to the company.