Cyclic steam stimulation (CSS) is a method of producing heavy oil by injecting a certain amount of steam into a well and shutting it in for a period until the heat energy of steam gets transferred to the reservoir and then putting it back on production. Cyclic steam injection is used extensively in heavy-oil reservoirs, tar sands, and in some cases to improve injectivity prior to steam flood or in situ combustion operations. Cyclic steam injection is also called steam soak or steam huff `n puff (slang) method.[1]

A remarkable characteristic of heavy oil is that its viscosity is very sensitive to temperature, which can be seen on the viscosity-temperature curve. By injecting high temperature and high-pressure steam into the reservoir, the formation temperature within a certain distance near the well zone increases and the reservoir and crude oil are heated. The steam injected into the reservoir first enters the high permeability zone. However, due to the low density of steam, the steam migrates towards the top of the reservoir under the action of gravity, and the reservoir is heated unevenly. However, due to the action of heat convection and heat conduction, when enough steam is injected, the heated zone gradually expands, and the temperature in the steam zone remains at the bottom hole steam temperature (250 ~ 350℃). The temperature in the steam condensation zone, namely the hot water zone, is still very high although it drops to some extent. The viscosity of crude oil in the resulting heated belt decreases from thousands mPa*S to around ten mPa*S. In this way, the oil flow resistance is greatly reduced, the flow coefficient (kh/μ) increases by orders of magnitude and the oil well production rate increases dramatically.

Because of the difference of vapor-liquid density, the overlap phenomenon is formed in the process of steam injection, and the longitudinal heating of the reservoir is uneven. However, the heated area of the reservoir increases and the non-displacement part of the reservoir is heated due to the heat conduction. Heated crude oil flows down the well by gravity. Gravity drainage becomes more significant in heavy oil reservoirs with large single layer thickness.

In the process of steam injection, the vaporization pressure of oil and water increases with the increase of temperature. When the vaporization pressure of oil and water is equal to the current pressure of the reservoir, the light components in crude oil are vaporized into the gas phase, resulting in steam distillation. The effect of distillation on heavy oil recovery is mainly shown in the following aspects: low viscosity of gas phase, small flow resistance and solvent flooding at the displacement front, and the light components in the dead-end rock pores will be transferred to the connected pores, resulting in self - dilution and viscosity reduction.

Formation compaction is a mechanism of oil displacement that cannot be ignored. The weight of the overlying layers compresses the reservoir layer to squeeze out the oil.

In the process of steam injection, the steam flow rate and specific volume in the steam chamber are large, and the steam in the leading edge of the steam chamber condenses and releases heat, leading to the disturbance effect. Therefore, emulsification occurs to form oil-in-water or water-in-oil emulsion. In heterogeneous reservoirs, these viscous emulsions clog the highly permeable bands, reducing steam pointing in the condensing zone and increasing sweep volume.

In the heterogeneous reservoir, the relative permeability of the reservoir to oil and water changes at high temperature after the reservoir is heated by wet steam injection, and the colloidal oil film on the surface of the sand grain is destroyed, and the wettability changes, from the original reservoir being oil-wet or strong oil-wet to water-wet or strong water-wet. At the same water saturation, the oil permeability increases, the water permeability decreases, and the bound water saturation increases. Moreover, the hot water is drawn into the low-permeability reservoir, and the replaced oil enters the percolation channels, increasing the flow of movable oil to the wellbore. 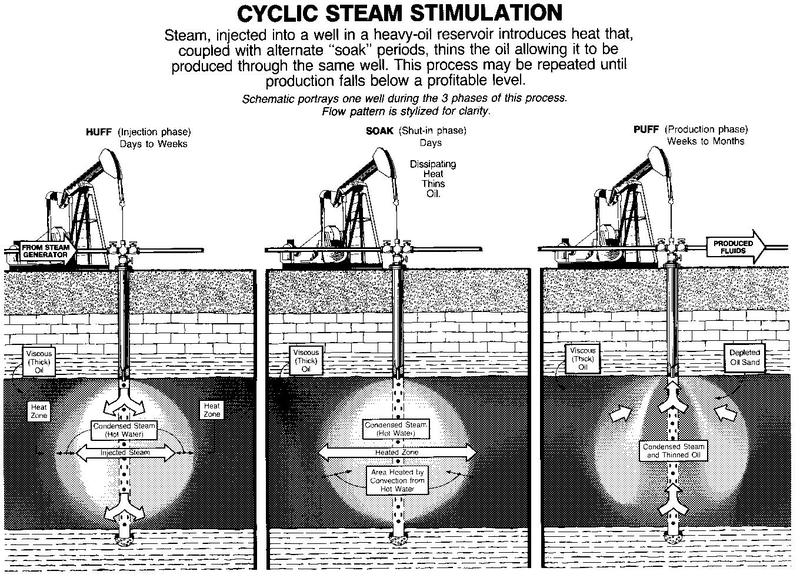