There are two types of markets for carbon offsets, compliance and voluntary. Compliance markets are those that are mandated by a regulatory body. They create legally binding caps on the total amount of carbon (or CO2e) that countries, companies, and other entities are legally permitted to emit. Offsets have historically been viewed as an important policy tool to support a transition to a lower emission market. The Kyoto Protocol to the United Nations Framework Convention on Climate Change (UNFCCC) established a cap-and-trade system that imposes national caps on the greenhouse gas emissions of high-income countries that ratified the Protocol[2]. The European Union Emissions Trading Scheme is a regionally regulated trading scheme regulated by the European Commission[3].

Carbon offsets typically try to match the offset in a similar timeframe as when the offset occurs (generally within 5 years). 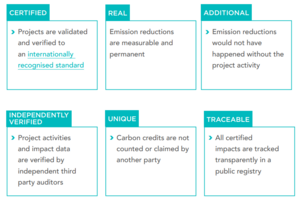 Challenges in the carbon offset markets