When we use "dry gas", we are referring to a reservoir gas made up primarily of methane with some intermediate-weight hydrocarbon molecules. The dry-gas phase diagram in Fig 1 indicates that because of this composition, dry gases do not undergo phase changes following a pressure reduction and therefore no liquids are formed either in the reservoir or production facilities because the path of depletion is completely outside the phase envelope. A volumetric dry gas reservoir is completely enclosed by low-permeability or completely impermeable barriers and does not receive pressure support from external sources, such as an encroaching aquifer. In addition, if the expansion of rock and connate water are negligible, then the primary source of pressure maintenance is gas expansion resulting from gas production and the subsequent pressure reduction.

Calculating Gas In Place By The Volumetric Method

The initial gas in place can be calculated by the volumetric method presented below:

The areal extent of the Bell Field gas reservoir was 1500 acres. the average thickness was 40 ft, so that the initial bulk volume was 60,000 acre-ft. Average porosity was 22%, and average connate water was 23%, Bg at the initial reservoir pressure of 3250 psia was calculated to be 0.00533 cu.ft/SCF. Therefore the initial gas in place was:

We can estimate the gas reserve or the total cumulative gas production over the life of the reservoir as the difference between original gas in place, G, and gas in place at some abandonment conditions, Ga 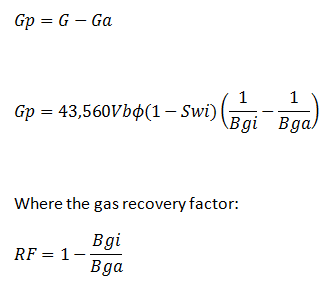 Note that the basic assumption in developing the equations for volumetric dry gas reservoir is that the initial water saturation does not change over the productive life of the reservoir. Simple gas expansion is a very efficient drive mechanism. Even though gas saturations at abandonment can be quite high, ultimate recoveries of 80% to 90% of the original gas in place are routinely achieved in volumetric gas reservoirs. The percentage of the original volume of gas in place that can be recovered depends on the abandonment pressure only, which is usually determined by economical rather than technical considerations.

We can also estimate the gas reserve or the total cumulative gas production Gp, for gas reservoirs under water drive. 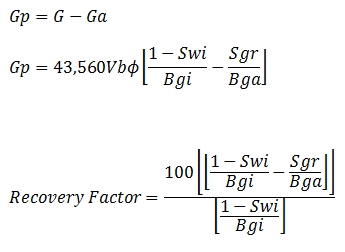 Partial water drive reservoirs are characterized by pressure declines greater than a complete water-drive but less than a volumetric reservoirs. (which is the case of the next illustrative example)

Suppose the Bell Gas Field is produced under a water-drive such that the pressure stabilizes at 1500 psia. If the residual gas saturation is 24% and the gas volume factor at 1500 psia is 0.01122 cu.ft/SCF, then the cumulative gas production is: 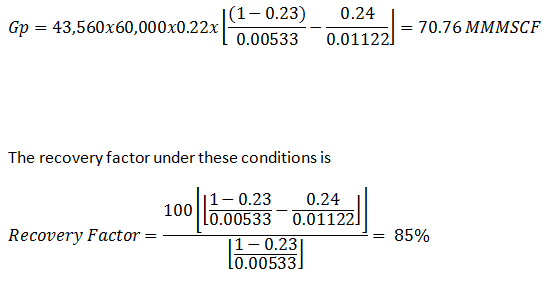 If the gas reservoir is bounded by a strong water aquifer in which the water influx rate approaches the reservoir's fluid withdrawal rate at reservoir conditions. These reservoirs are also called complete water-drive and are characterized by minimal pressure decline, the cumulative gas production and the recovery factor become. 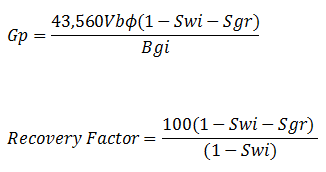 For the Bell Gas Field, assuming a residual gas saturation of 24%:

Previously, the initial gas in place was calculated using the volumetric method by knowing the porosity, connate water, and the bulk volume. If these data are not known with any reasonable precision, then in this case the material balance method may be used to calculate the initial gas in place. The general material balance for a gas reservoir is:

The above equation could have been derived by applying the law of conservation of mass to the reservoir and the associated production. For most gas reservoirs, the gas compressibility term is much greater than the formation and water compressibilities, and the second term on the left-hand side of Eq2.10 becomes negligible

When the reservoir pressure are abnormally high, this term is not negligible and should not be ignored. When there is neither water encroachment into nor water production from a reservoir of interest, the reservoir is said to be volumetric, for a volumetric gas reservoir, Eq3.15 reduces to

Substituting the expression for Bg and Bgi into Eq3.16, the following is obtained:

Noting that the production is essentially an isothermal process (i.e., the reservoir temperature remains constant), then Eq. 3.17 is reduced to: 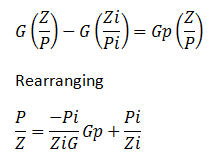 Similar to van Everdingen etals.’s . and Halvena and Odeh’s graphical analysis techniques, the form of Eq. 3.18 suggests that the reservoir is volumetric, a plot of P/z vs. G will be a straight line, from which we can estimate both original gas in place and gas reserve at some abandonment conditions (P/z). If P/z is set equal to zero, which would represent the production of all the gas from a reservoir, then the corresponding Gp equals G, the initial gas in place. If sufficient pressure and production data are available to define the line fully, we also can determine the dominant drive mechanism from the shape of the plot. Although consistent deviations from a straight line suggest other sources of reservoir energy, errors in pressure and production measurements also can cause departure from a straight line. Obviously, early in the production life of a reservoir when few data are available, this plotting technique may not be accurate, it requires at least three years of accurate pressure depletion and gas production data. Here is an example that illustrates the use of this technique. (the example is contained in the following photos.)

Here are the required charts for solving the example: