Difference between revisions of "Nonhomogeneous Two-Phase Flow in Pipes" 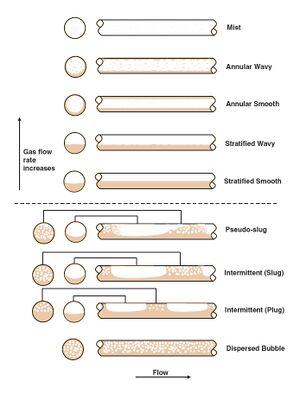 In this type of flows, one phase of a relatively lower flow rate is dispersed into a continuous phase that moves at a relatively high flow rate. Even though the flow rates are different, the mixture seems to travel at the same in-situ velocity. Thereby, the slippage or the difference between gas and liquid velocities are approximated at zero. Therefore, this flow pattern is effectively approximated with homogeneous flow models. There are two types of this flow.

1. Dispersed Bubble Flow: The liquid is the continuous phase while gas is dispersed. it occurs at the high liquid to gas flow rates. Due to the high liquid flow rate, the inertia forces of liquid significantly overcome the effects of interfacial tension of the gas. This leads the gas to shatter into small babbles. Also, the inertia forces of the liquid significantly overcome the buoyancy forces of the gas, which allows the gas bubble to disperse in all radial directions even at the bottom of the horizontal pipes.

At lower liquid velocities relative to gas velocities, gas aggregates into large bubbles and move close to the top of the pipe inner wall. The following forms of intermittent flow patterns exist:

2. Annular Flow: the liquid moves as a continuous film that covers the entire pipe circumference. Gas moves in the core as a continuous stream. In most cases, visually observed liquid entrainments fill up the gas core. Interfacial waves of different shapes and nature exist at the interface between liquid and gas.