Naturally Occurring Radioactive Materials (NORM) are a wide range of radioactive isotopes that include elements such as carbon 14 and potassium 40, both of which are present in the human body. But the main radioactive elements involved in oil and gas production are those found throughout Earth's crust. These elements include uranium and thorium and their respective byproducts, including radon gas.

When Earth's crust was formed, radioactive materials like uranium and thorium were incorporated into it.[1] Normally, these elements exist in trace concentrations of parts per million (ppm), but the decay of such unstable radioactive materials forms other radionuclides that, under certain conditions in the subsurface environment--such as pressure, temperature, etc.--can be transported from the reservoir to the surface as oil and gas products are being recovered. 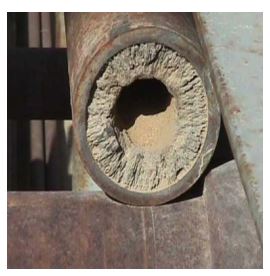 During production, NORM flows with the mixture of oil, gas, and water. It then accumulates in scale, sludge, and scrapings. NORM can also form a thin film on the interior surfaces of gas processing equipment and vessels. The level of NORM accumulations in each medium varies between facilities and depends on different parameters, including geological formation and operational setup. A NORM survey, sampling, and analysis must be performed to determine if a facility has NORM contamination. The three types of radiation emitted by NORM are: Alpha (α), Beta (β), and Gamma (γ).

Scaling in downhole and surface production equipment is well known where water-drive reservoirs are in production.[2] Sulfate scales--mainly consisting of barium, strontium, and calcium--occur on surface and downhole equipment. Radium traces could be present in such scales, causing radioactivity. Cleaning such scaled equipment for future use can present a potential health hazard. Alternately, the equipment may have to be removed, stored, and disposed of according to established procedures for low-level radioactive waste.

Measuring radiation levels at the wellsite requires the use of rugged gamma ray survey meters by specially trained personnel. The measurement of low levels of radiation on individual tubing sections can be difficult in the presence of natural background radiation. Fortunately, gamma ray well logging tools are highly sensitive instruments that can measure radiation inside scaled tubing in wells with less sensitivity to background signal. Evaluation of scale radioactivity before removal of tubing from the well benefits from a a reconnaissance logging technique that uses a gamma ray logging tool calibrated specifically for radium.

Various national and international organizations have issued regulations and guidelines on radiation protection in general, including specific guidelines for NORM, but none are specific to the oil and gas industry, nor do they provide clear guidelines to enable effective NORM management. Because of the inadequacies of these rules, the International Association of Oil and Gas Producers (OGP) established a task force, headed by Saudi Aramco, to develop NORM Management Guidelines.[1]Thorough research, review and thorough consideration of most available NORM regulations, along the industry's current best practices in NORM management, went into the task. The OGP guidelines offer a simple and logical method of managing NORM-impacted operations that are flexible enough to be implemented across the industry.

Workers who are required to work in a plant or with equipment that is NORM contaminated have the potential for external radiation exposure from closed systems during normal operations, and internal exposure if no controls are established during shutdowns and periods where systems are open. Equipment contaminated with NORM cannot be released for sale or disposal without being decontaminated and verified free of contamination. Waste material that is contaminated with enhanced levels of NORM is required to be disposed of in a controlled manner to ensure it does not provide an unacceptable risk to the environment and the general public.

According to Diyashev, et al, between 1990 and 1991, multiple cases of radioactive scale were detected on the technological equipment of gathering, transport, and oil treatment systems.[3] Of the equipment tested, 30% was contaminated with radioactive scale. Gammaradiating power on the external surface of contaminated equipment reaches 6 mrem/h, twice the safe radiation dose for professionals established by the sanitary legislation of Russia. By Diyashev's estimation, the quantity of radioactive waste removed from technological equipment during repairs is as high as 3--4 thousand tons per year.

The ultimate objective for NORM disposal should be providing protection to human health and the environment in a safe, practical, cost-effective, and permanent manner.[1] Disposal design should prevent contamination of natural resources like groundwater or soil in potential residential or agricultural areas. Re-injection and Class 1 landfills are the optimum methods of NORM disposal according to risk assessment studies conducted by Saudi Aramco. Ultimately, Saudi Aramco found that underground injection, specifically slurry fracture injection, to be the superior disposal method.