Mechanisms of operating in different types of reservoirs

Regardless of whether it is sandstone or carbonate reservoirs, the understanding of its dominant mechanism has not yet reached a consensus. The potential displacement mechanisms are mainly fines migration[2], multicomponent ionic exchange (MIE)[3], electrical double layer[4],  and pH effects[5]. 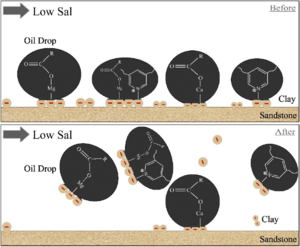 Fine-grain migration was first proposed in 1999. The migration of fine particles from the rock surface may change the wettability of the rock surface and make it more water wet. It may also block the high permeability channels and increase the water sweep efficiency. 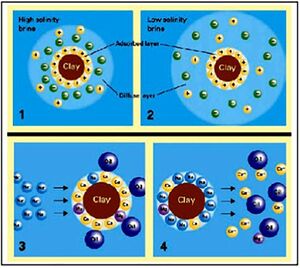 It was proposed that the mechanism of enhanced oil recovery in which the expansion of the electric double layer leads to the wetting modification of the reservoir. In high salinity reservoir, the electric double layer is more compact allowing less oil between the clay particles to be released. When the water in the reservoir is less saline, the double layer expands allowing oil between clay particles to be produced. In a typical saline reservoir environment, the outside of the clay particle is composed a negatively charged diffusion layer, and the inside of the clay particle is composed of a positively charged adsorption layer. The positive ions are mainly divalent cations. When the salinity decreases, the double layer expands, and sodium ions replace the divalent cations. The water wettability increases due to electrostatic repulsion of crude oil components away from the rock.

In sandstone reservoirs, the organic matter of crude oil is desorbed from the clay surface by the increase of local pH at the clay-water interface, resulting in increased water wettability and enhanced oil recovery.